- is a form of self-respect 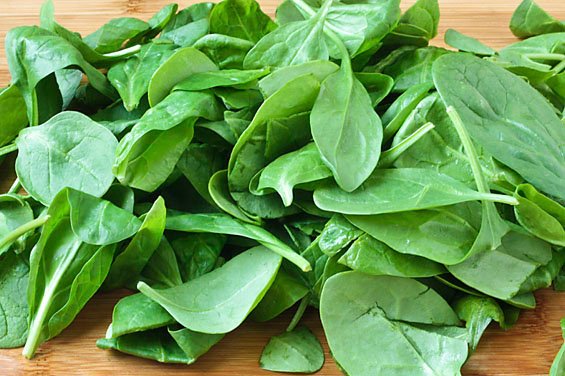 Spinach is one of the most nutritious foods available.. low in calories & high in vitamins.Below are 11 benefits of spinach that are reason enough why it should find its way into your grocery bag.

Diet: One cup of spinach has nearly 20% of the RDA of dietary fiber, which aids in digestion, prevents constipation, maintains low blood sugar, and curbs overeating.

Cancer: Flavonoids — a phytonutrient with anti-cancer properties abundant in spinach — have been shown to slow down cell division in human stomach and skin cancer cells. Furthermore, spinach has shown significant protection against the occurrence of aggressive prostate cancer.

Anti-Inflammatory: Neoxanthin and violaxanthin are two anti-inflammatory epoxyxanthophylls that play an important role in regulation of inflammation and are present in unusual amounts in spinach.

Antioxidants: The vitamin C, vitamin E, beta-carotene, manganese, zinc and selenium present in spinach all serve as powerful antioxidants. These combat the onset of osteoporosis, atherosclerosis and high blood pressure.

Blood Pressure: By inhibiting the angiotensin I-converting enzyme, peptides within spinach have been shown to effectively lower blood pressure.

Vision: Both antioxidants lutein and zeaxanthin are especially plentiful in spinach and protect the eye from cataracts and age-related macular degeneration.

Immunity: One cup of spinach contains over 337% of the RDA of vitamin A that not only protects and strengthens “entry points” into the human body, such as mucous membranes, respiratory, urinary and intestinal tracts, but is also a key component of lymphocytes (or white blood cells) that fight infection.

Skin: The high amount of vitamin A in spinach also promotes healthy skin by allowing for proper moisture retention in the epidermis. This helps in fighting psoriasis, keratinization, acne and even wrinkles.

Bones: One cup of boiled spinach provides over 1000% of the RDA of vitamin K. This can prevent excess activation of osteoclasts (the cells that break down bones), as well as promote the synthesis of osteocalcin, the protein that is essential for maintaining the strength and density of our bones.

Calcification: Vitamin K is a crucial component of the process called carboxylation, which produces the matrix Gla protein that directly prevents calcium from forming in tissue. Eating one cup of spinach contributes to this process that fights atherosclerosis, cardiovascular disease and stroke thereby contributing to the health benefits of Spinach

Brain and Nervous Function: The abundance of vitamin K in spinach contributes greatly to a healthy nervous system.