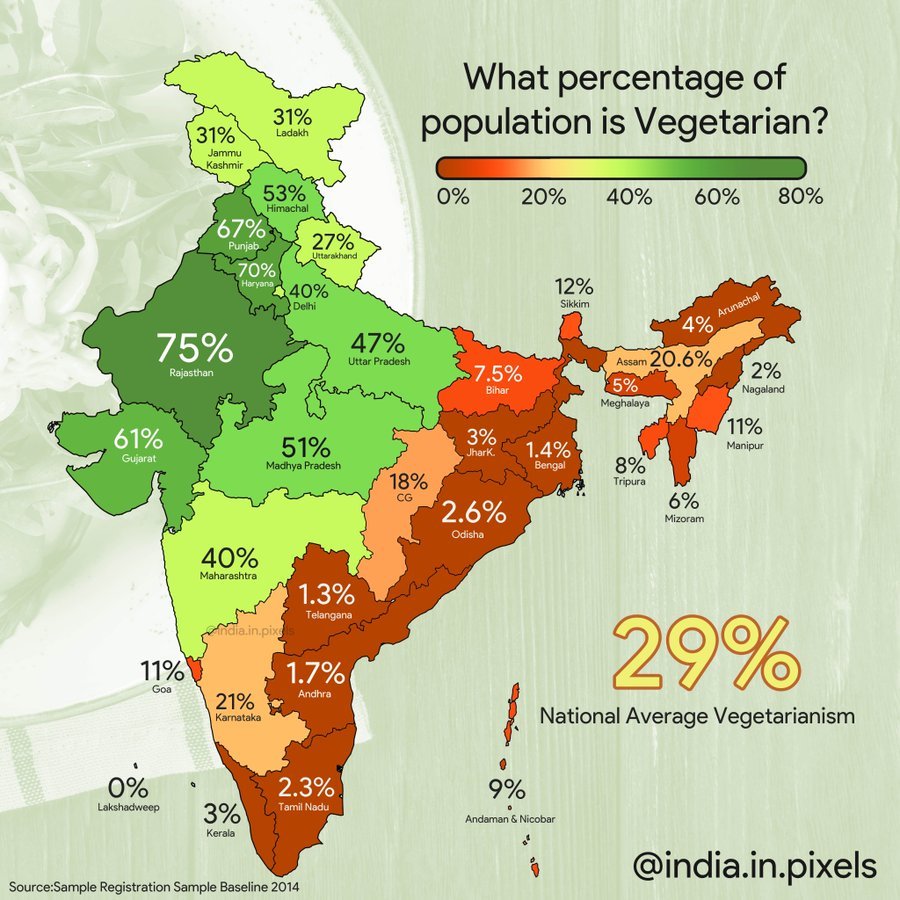 India is considered the land of spices and has traditional food preparation methods and culinary arts that date back many thousands of years.  The food and the approaches to cooking have remained basically the same, although they have been influenced by occupying forces as well as through trade.

India is a country of many climates, religions and social customs and it does not have one national cuisine.  Indian diets are strongly impacted by religion and most Indians follow some sort of Hinduism while others are Muslims, Christians or Jews.  All of these groups have different food habits and different food restrictions that impact their cuisine.

Hindus, for example, are prohibited from eating beef; Muslims and Jews do not eat pork.  A vast number of Indians are vegetarians and vegetarianism is prevalent throughout India.  Fresh meat, poultry, eggs and fish are often excluded from the diet.  In some regions, foods that have the colour of blood, such as tomatoes and watermelon, vegetables grown underground, or vegetables resembling a head, such as the mushroom, are also avoided.

India is also famous for its curried food.  However, the Indian use of the term curry is different than our use of the word. In India, curry refers to the preparation of foods with a sauce.  The sauce does not have a predetermined spice blend.  Indian cooks prefer to develop their own individual spice mixtures that they prepare for each dish.  This mixture of spices is referred to as garam masala and each cook will have a personal blend that he or she prefers.  In Indian cuisine, a subtle blending of spices that enhance the character of the dish is typical.  The spices themselves do not dominate the dish.  Although the same spices are common to many dishes, you will find that they are used in different proportions to bring out different flavors.

Indian meal patterns are influenced greatly by region and social class.  A rich tea or coffee made with milk, sugar and sometimes spices is enjoyed early in the morning.  Breakfast is usually consumed between 9 a.m. and 11 a.m., and consists of rice or bread, pickled fruits or vegetables as well as sambhar which is a dish of cooked vegetables and lentils mixed with a sauce of oil, onion, garlic, turmeric, ground sweet peppers and salt.  At about 4 p.m. or 5 p.m., sweet and spicy snack foods are eaten with coffee or tea.  The main meal of the day is served in the evening and is typically eaten between 7 p.m. and 9 p.m.

The typical dinner would consist of at least one rice dish, a main vegetable, legume or meat dish, a vegetable or legume side dish and baked or fried bread.  Often the meal would be accompanied by pickled vegetables, or raita (a yogurt based vegetable relish).  Dessert would typically be fruit or a sweet milk-based pudding.  During meals it is customary to place all food courses on the table at once.  Serving all foods at once allows people to freely combine tastes and textures and experiment with a variety of taste and texture combinations.  At the end of the meal, herbs and spices such as anise, cardamom, fennel seeds and nuts (often betel nuts) are passed around.  These are then rolled into betel leaves (paan) and chewed to freshen breath and aid in digestion.

Savory snacks may consist of deep-fried battered-coated vegetables, pancakes with or without fillings and fried seasoned doughs made from lentils and wheat.  These snacks are often served with chutneys.  Sweet snacks are often milk-based, and frequently use nuts, coconut, sesame seeds and lentil flour.

Overall the food culture of India varies a lot from region to region but the cuisine in itself can be overwhelmingly balanced and nutritious as seen by the wide use of variety of all sections of a food pyramid. It is up to us now to be use and blend the food culture and knowledge of nutrition both to enjoy the food as well as remain fit and healthy.